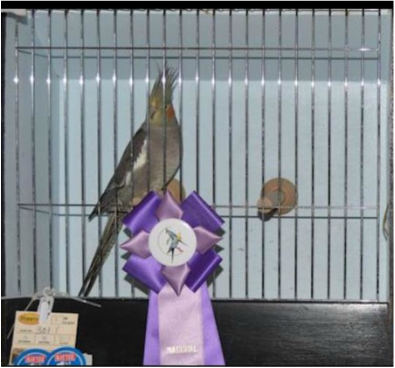 GrCh Normal Hen NCS 18P-202-12
Perkins Tiels Aviary was established in 2008 by it's owner Josh Perkins in Louisville, KY.  In 2008, Josh got his first two cockatiels, "Pearl" & "Tino".  They came home with him and the passion for the cockatiel has grown immensely every since.

In late 2008, Josh joined the National Cockatiel Society after becoming acquainted with  member, Ellen O'Neil from Massachusetts.  In 2009, he then went to his first exhibition show in Nashville, TN put on by Middle Tennessee Caged Bird Club.  He fell in love with exhibition after his WF Pied cock "Noah" went 7th Best Novice (given to him by fellow exhibitor Chris Orowitz) and has been traveling the east coast from 2009 until present day showing his cockatiels.  In 2012, he earned achieved status of Advanced Exhibitor for the National Cockatiel Society.

In 2019 Josh was accepted onto the National Cockatiel Society's Judge's Panel.  This was a great accomplishment for the work he put into over the years.


Cockatiels have grown to become a huge part of Josh's life and have become a true passion for him.  His breeding program is revolved around breeding toward's the NCS Standard of Perfection.